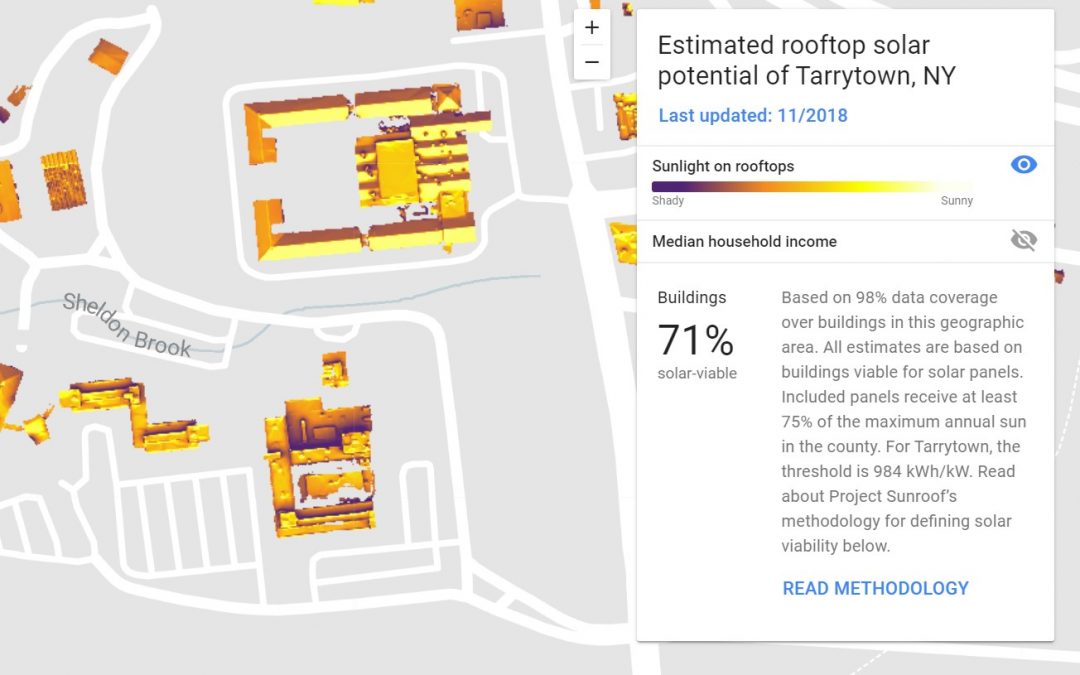 Good news from a tech behemoth: Google has created a little-known automated tool, called Project Sunroof, that shows buildings’ and houses’ potential for solar photovoltaic generation. You can enter an address, or a town’s name or zip code, and see the results immediately.

The brighter the red-to-yellow color on the rooftop, the more energy-generating potential if covered with solar panels. If the roof is dark, it means that Google’s algorithm has determined that it is too shaded to make solar use practical, at least without tree thinning or modifying the angle of the panels.

For example, my house on Wildey St has an 8-year-old solar installation that only produces about 2kW peak power, but Google shows a potential of 4.5kW for my house – 98% of my estimated usage – using modern panels and including surfaces not currently used for solar. The estimate also shows a $16,000 cost savings over 20 years, if I follow the recommendations. That’s based on Google’s estimated installation cost of $7,000 after incentives, and $23,000 in benefits, yielding a payback period of 7 years. They also show the savings if the installation is leased, or bought with financing. (You can select your average monthly electric bill to customize the savings estimate.)

Looking at the entire Village of Tarrytown, Project Sunroof estimates that 71% of the Village’s 1,800 rooftops are solar-viable. That’s a huge potential, given that we currently have less than 100 solar-equipped rooftops. The tool estimates that if all roofs (2 million sq-ft) were solarized, Tarrytown could generate 32.7 Gigawatt-hours of electricity in a year!

The largest portion of that energy would come from installations on flat roofs, which are greatly underutilized in Tarrytown. There are about 200 roofs in Tarrytown that could potentially produce 20kW or more, and some that are large enough to provide a “community solar” project, in which the power generated can be sold to homes without their own solar panels.

Google has also begun to determine which roofs already have solar installations, indicating those with red dots, but they haven’t included our area yet with that feature.

Note that all these numbers are estimates, but Google states their methodology clearly for those who want to learn more. The Tarrytown Environmental Advisory Council (TEAC) suggests that everyone can use this tool as an initial assessment of their rooftop potential, but it’s important to contact a solar company to perform a free solar survey of your specific roof and property, which can be more accurate.