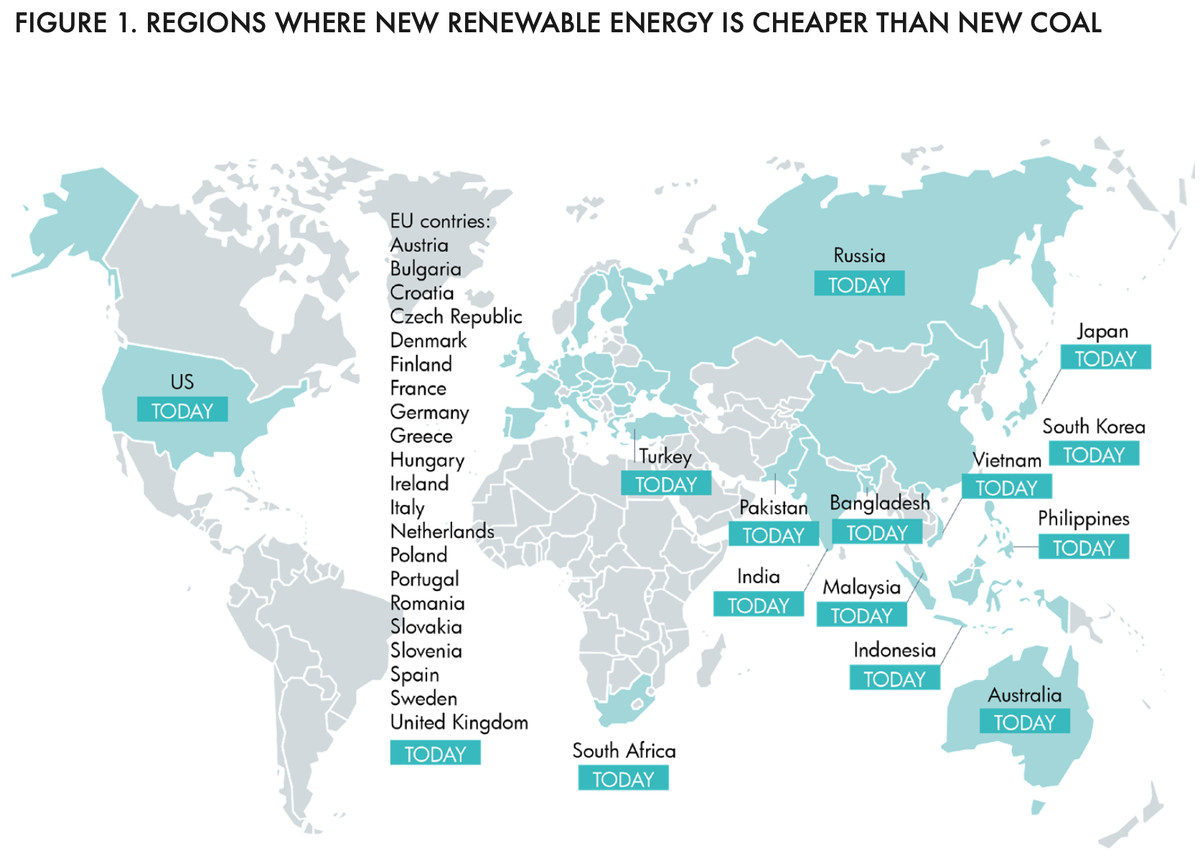 Below is an excerpt from this excellent article on Vox: https://www.vox.com/energy-and-environment/2020/3/14/21177941/climate-change-coal-renewable-energy

So let’s walk through the four big findings.

Just two years ago, in 2018, Carbon Tracker did a similar analysis and concluded that new renewable energy would undercut new coal in all major markets by 2025. “Using updated data from publicly available sources,” it concludes in this year’s report, “we now believe these conclusions are too conservative.”

In fact, they say, new renewables are cheaper than new coal plants in all major markets … today.

2. Over half the existing global coal fleet is more expensive to run than building new renewables.

The second threshold, Carbon Tracker finds, has been crossed by about 60 percent of the global coal fleet, which now has a higher LRMC than the LCOE of new renewable energy.

“This trend is most pronounced in the EU, which has a strong carbon price and has benefited from years of investment in renewable energy,” the report says. “The US, China, and India are not far behind the EU due to excellent renewable energy resources, low capital costs, and least-cost policymaking.”

In markets where this threshold has not been crossed, like Turkey and Japan, the blame generally falls on unsupportive policy and unreliable markets.

3. By 2030, it will be cheaper to build new renewables than to run existing coal — everywhere.

This is the real mind-blower: even in laggard markets, Carbon Tracker projects that coal power will cross the second threshold by 2030 at the latest.

In other words, within ten years, virtually every coal plant in the world will be uneconomic, producing power more expensive than what could be generated by new renewables. (And Carbon Tracker doesn’t even take into account the enormous costs of decommissioning and cleaning up after dead coal plants.)

4. Investors stand to lose over $600 billion on doomed coal plants.

Coal plants are long-term investments, built to last 40 or 50 years. There are coal plants running in the US that are over a century old. Investors’ capital recovery is typically 15 to 20 years.

According to Carbon Tracker, 499 gigawatts worth of coal-power capacity is “announced, permitted, pre-permitted, and under-construction throughout the world.” (By way of comparison, the current global coal fleet is about 2,000 GW.) That adds up to about $638 billion worth of investment.

If Carbon Tracker’s analysis is correct, all of those plants will be uneconomic either upon being built or shortly thereafter. They will become stranded assets — and $638 billion is a lot of stranded assets.

It is not economics propping coal up

All of this raises the question: if more than half of current coal plants are uneconomic, and virtually all future coal plants will be, why are people still investing in them? How is coal defying market gravity, staying up despite the economic forces dragging it down?

Because most energy markets aren’t particularly market-like. They tend to be centrally planned and highly regulated, though they do range in the degree of regulation. The most competitive markets — “deregulated” markets where there is something akin to open competition among energy resources — are generally found in the EU. In the US, there is a mix of semi-regulated markets (with some competition) and fully regulated markets, wherein the entire electricity supply chain is controlled by monopoly utilities. The situation is similar in Asian countries, a mix with even more barriers to markets.