Tarrytown Environmental Advisory Council organizes Earth Day celebrations every year, and in 2019, we took it to new heights! With a whole day of activities from bird watching to community garden building, the village rolled up its sleeves and made the place healthier, prettier and better for its floral and faunal inhabitants. 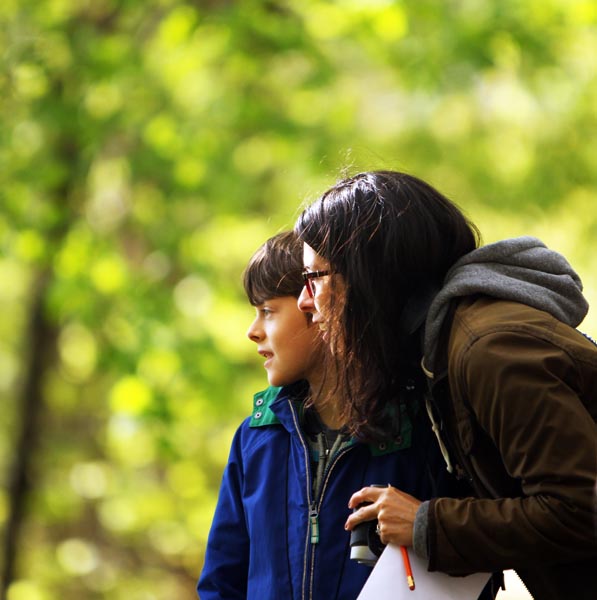 See the Gallery of Photos Here!

“This is the best, most fun Earth Day Celebration I have ever seen! TEAC really knocks it out of the park! So many real and meaningful activities that build community and get people connected to the Earth and each other!”

This is prime migration time for neotropical songbirds (swallows, warblers, orioles, tanagers) and we hoped to see some on the walk.

With many tree swallows flying over the lakes, it was nevertheless a quiet start to the actual walk – just several beautiful Yellow-rumped Warblers flitting around a tree.  Along the way – many Song Sparrows singing, Common Grackles and Red-winged Blackbirds calling from trees.  We saw most of the common local birds – American Robins, Blue Jays, Northern Cardinals, Black-capped Chickadees.  Several people left at 10 but for those who stayed – we saw two Northern Flickers doing a wonderful mating display, and found several more migrants – House Wrens, Black and White Warblers and Ruby-crowned Kinglets. 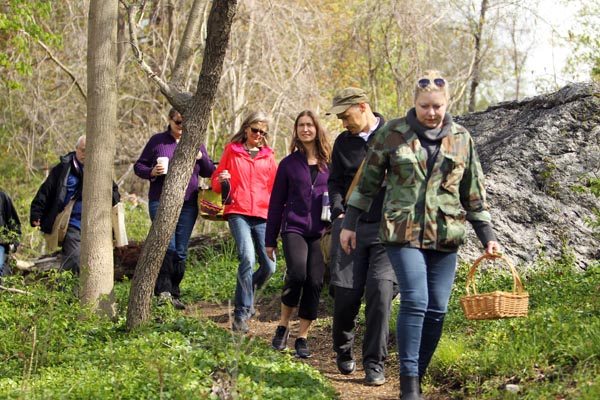 A friendly and informative stroll near the north-western woods of Tarrytown Lakes – showcased the excitement of mycology (mushroom study), and just how a little bit of curiosity can triple your hiking fun.

First, understanding of foraging etiquette and sustainable practices was explained, while next the nature of invasive, non–natives plants slowly creeping through our woodlands was learned.

As the path gently descended into thicker woods, the hunt for wild fungus commenced. From slimy branch-clingers to Morel imposters, perennial ‘partners’ in the ecosystem to the adaptive lichen we have all seen before, the 90 minute excursion illuminated the simplest of acreage to surprising complexity.

Local residents joined the Connecticut–Westchester Mycological Association (COMA) for a very informative walk led by Taro Ietaka. We followed the green trail, one of the newest Lake trails near Tower Hill Road which cuts down to the lake. Taro also pointed out many invasive plants which are strangling the woods. The cool sunny day was ideal for the outing and we were fueled by delicious hot coffee from our friends at Coffee Labs and yummy banana muffins donated by Grass Roots. To learn more about COMA please visit http://www.comafungi.org/.

We had 30 participants at Earth Day activities within Neperan Park. Thankfully the hillside was mostly clean, sourcing just one bag of garbage.

Weeds present a different picture!  Mounds of weeds were pulled along the perimeter of the park and approximately 8 cubic yards of mulch spread. The mulched area is to be the home of new plantings, beyond the 3 trees that were planted that day.

We have now planted 40 grasses and 9 milkweeds, on Love Your Park day (May 4th).

Additionally we are happy to announce that Little Gardens of Tarrytown garden club received a grant of $750 for new native plants from National Garden Clubs, Inc. to be located in the southwest corner of the park, to link two existing gardens. Stay tuned. We thank all the volunteers and village park’s personnel who worked so hard to get the area prepped for planting on Earth Day! 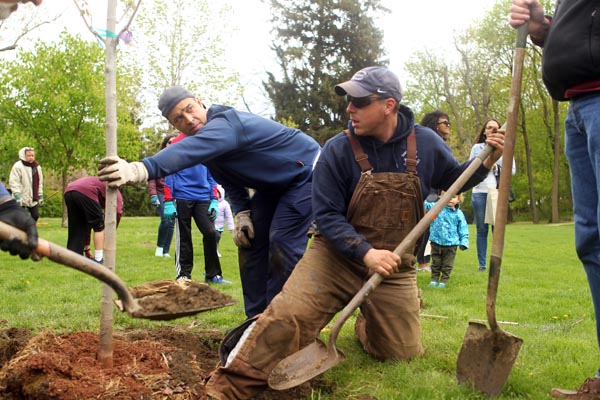 – Over 20 volunteers (adults and kids) were at Neperan park doing spring clean up and mulching. They joined us to plant trees in the park

– Rich Slingerland joined us and helped plant both trees

There were over 40 volunteers of all ages.

Volunteers enjoyed some free snacks from GoGo SqueeZ and supported the PTA with purchases of sweet treats donated by our parents. The most notable garbage was found on Washington, especially in the parking lots just passed the Main and Washington cross street. The bushes and area surrounding the YMCA also had a significant amount of trash and cigarette butts. Since it was our first year participating, the PTA is looking forward to making the in-town section of the clean up even bigger and better next year. 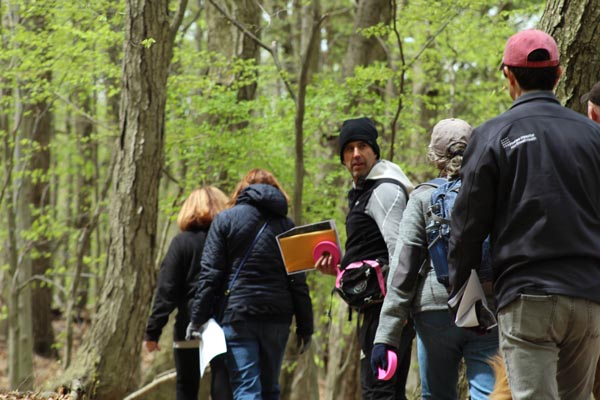 A little later that day, a more rigorous trek departed from the eastern edge of the lakes, just beside the old pump house.

On this relatively lesser-known path, a team of enthusiasts contributed to better-establishing the trail, from placing and replacing blazes (bright pink trail marker ribbons) to simply treading the route, which keeps the trail itself cleared and compacted.

Encountering cascading water falls, some lovely old stone work, wild onions in peak season, and even an elusive Morel mushroom, the challenge of the initial ascent was well worth the rewards. 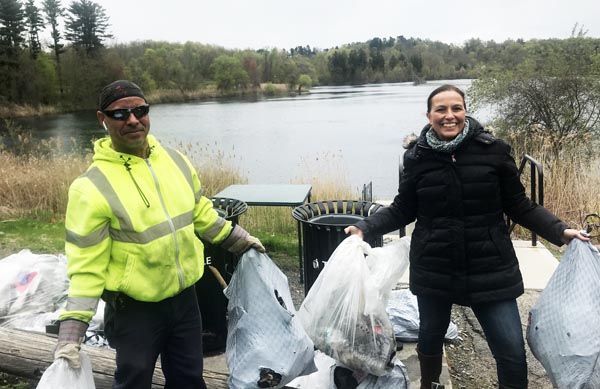 40 participants pitched in and enjoyed the beautiful day at the Lakes.

Working on Neperan Road. around the lakes, and throughout the various trails and paths they collected about 50 bags of trash. The group was joined by high school, middle school and EF students. 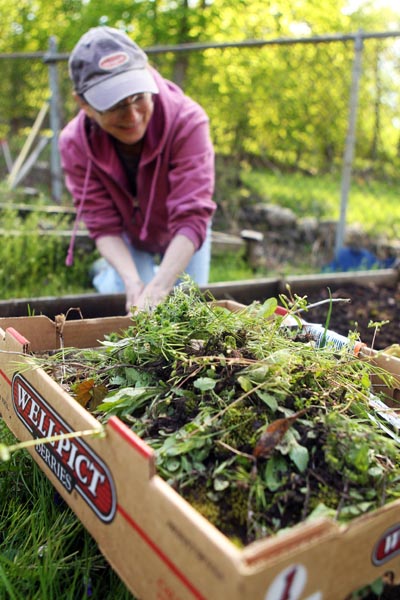 The community garden at John Paulding school became one of TEAC’s most popular Earth Day events, and it drew a great crowd of eager gardeners ready to start this year’s planting season. 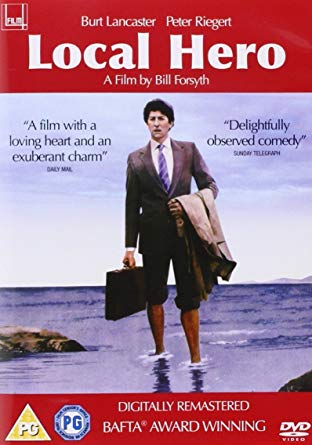 A small group of Villagers gathered in the 3rd-floor media room at the Warner Library to enjoy a movie – with fresh popcorn!

TEAC and the Library presented “Local Hero”, a beautiful film from 1983 centering around a small Scottish coastal village and how they resisted a proposed oil refinery project. It was the last movie featuring Burt Lancaster.

TEAC extends congratulations to Grass Roots Kitchen for collecting the largest number – 60! – leaves with customers’ pledges for the environment on its Eco-Pledge tree. The runner-up among the six locations was Muddy Water, with 31. A big thanks to all the locations for helping raise consciousness and spur interest in action and lifestyle tweaks to help reduce, reuse, recycle, protect, clean up, and use fewer resources for our environment and thanks to all the participants!