Driving into Manhattan for work, a Broadway show, or dinner at your favorite restaurant may come with an added cost in the near future but if all goes as planned, the imposed fees will improve the quality of life for many New York City residents and visitors.

Governor Andrew M. Cuomo’s Congestion Pricing Plan, part of a larger 20-point agenda for the state of New York, was delivered earlier this year but is not expected to start until 2021. The Congestion Pricing Plan aims to reduce traffic congestion in key areas of Manhattan by imposing fees on cars and trucks that enter the borough below 60th Street. Th 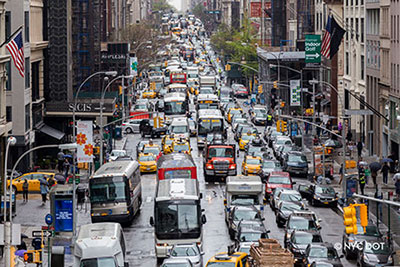 Like many public issues that affect our wallets, the congestion pricing plan has its share of supporters and opponents.

London, Stockholm, and Singapore are successful international models to follow however, New York would be the first city in America to launch the program. Congestion pricing is a bold plan with plenty of criticism but the benefits are positive. The environmentally-friendly measure will save on fuel costs, reduce carbon emissions, and improve air quality for millions of New Yorkers. Follow the issue as the details emerge from Albany and New York City.

The Tarrytown Environmental Advisory Council works for safe and equal access and movement throughout the Village by working with the administration to improve sidewalks, increase pedestrian and bicycle access, facilitate public transportation, improve signage and traffic signals and plan for improved access and transportation in future Village developments.